RSS chief Mohan Bhagwat joined in May 2019 and he has 215.1K followers on his Twitter handle. He is followed by Smriti Z Irani. 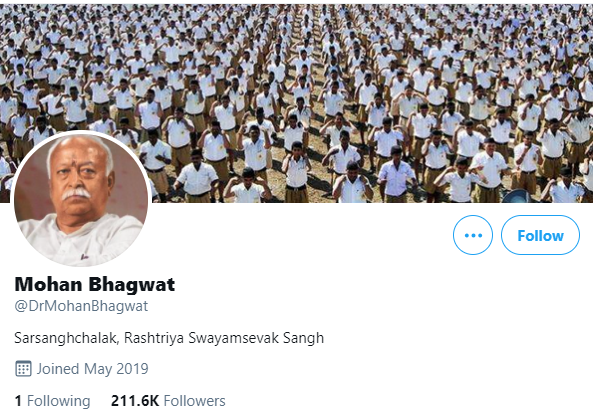 Although Naidu’s blue tick was restored within a few hours after raising objections by the Vice President’s office.

The Ministry of Electronics and IT probably going to issue notice to Twitter to ask reasons without prior information. Government sources said that by doing this, Twitter has shown contempt of constitutional post and Twitter wants to test India’s patience.

Citing the reasons, The RSS sources informed a leading daily that according to Twitter’s rule,  if the user hasn’t logged in for the past six months, the account is considered inactive and verification status is also withdrawn. All the RSS leaders had not tweeted so far.

Their accounts were created to avoid impersonation, source adds.

On being asked about its move on Venkaiah Naidu, Twitter responds that the user was inactive for the past six
months.

Government sources pointed that it’s a surprising act against the highest dignitary of the country as accounts of former Union Ministers Arun Jaitley and Sushma Swaraj were verified even after their death in 2019.
Soon after the removal of blue tick mark from Venkaih Naidu’s Account, a controversy erupted against Twitter. A hashtag #BanTwitterIndia starts trending on Twitter.

Naidu’s personal account was created in August 2013. It has 1.3 million followers. The last tweet from the handle was made on July 23, 2020.